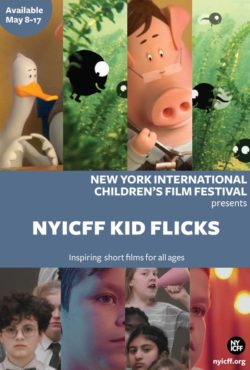 Catch the best short films from around the world! (Ages 3+)
56 mins, In English, or with no dialogue

The New York International Children’s Film Festival brings you a great opportunity to share the art of film with kids, with this program filled with fun and clever stories of growth and transformation.

If you’ve ever been the youngest of the group, you’ll sympathize with the little tadpole who always falls a tad behind in the charming KUAP. Catching up on penmanship is the name of the game if you want to graduate from pencils in the winning doc Pen Licence. Then little ones are in charge and grown-ups get to play when the hilarious Flipped reworks the script.

With films from 10 countries, these shorts are sure to delight and inspire.