Happy Holidays from the BIFF

By BIFFDecember 23, 2020Newsletters
No Comments 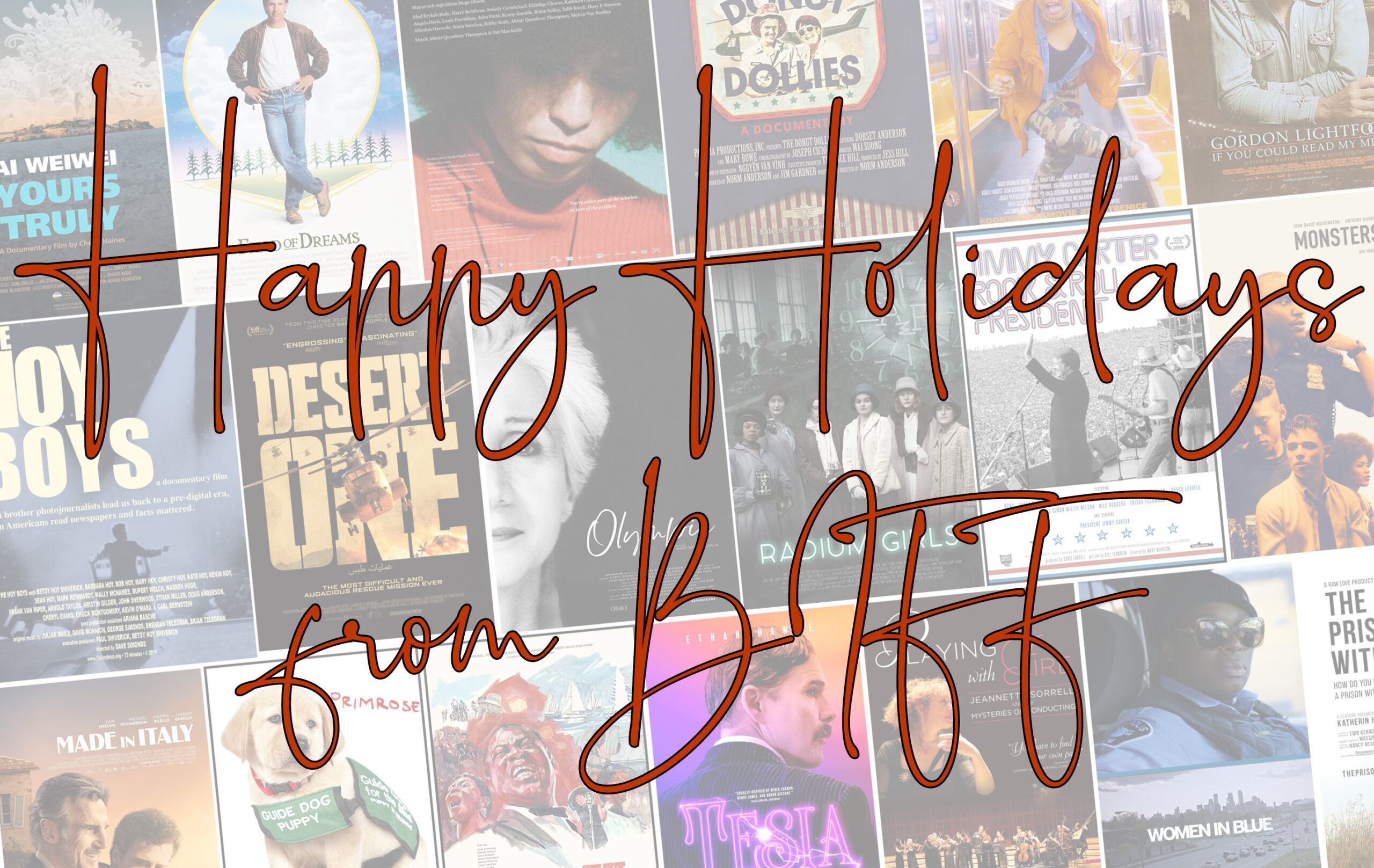 On behalf of everyone at BIFF, we want to take a moment to wish you all a safe, happy and healthy holiday season. We look forward to seeing each other in a lighter, brighter and stronger 2021!

While you are home this holiday season, Lauren, Laura and I wanted to share with you what we have been watching…holiday movies, inspirational films and of course, a few good love stories!

LAUREN
When the snow is piling up outside and with the holiday season upon us, watching classic films in their original black and white format is what I really enjoy as I nestle under a blanket with the lights off and popcorn in hand. Frank Capra was the most prominent filmmaker of the 1930’s winning three Academy Awards for best director during that time. His film IT’S A WONDERFUL LIFE was based on the short story The Greatest Gift by Philip Van Doren Stern. The tale of Jimmy Stewart as George Bailey and the certain truths in this film…the importance of friends, family and neighbors, that we are all in this together and can’t do it alone really strikes a cord as we wind down this difficult year. The next film that not many people are familiar with is THE BITTER TEA OF GENERAL YEN starring Barbara Stanwyck. The first time I watched this I cried, and to me, it’s one Capra’s most interesting films, very different from his lighter films that made is reputation. Strange and unusual for the 1930’s,
this film touches upon interracial romance and is about a young fiancée of a missionary in China who is kidnapped by a general with whom she eventually falls in love. Very progressive, dark and mysterious, this film is a gem that you don’t want to miss.

LAURA
I get very sentimental around the holidays and usually only have time for old favorites. The silly but sweet ELF is one of them. Will Ferrell is never funnier, especially when he is “playing” with the “naughty” James Caan, Papa Elf Bob Newhart, and Ed Asner as one of the best Santa’s ever. I laugh out loud through the whole movie but the “Jack-in-the-Box” scene is my favorite and results in multiple rewinds. (Buddy’s duet with Zooey Deschanel is a close second). I love that this movie is for most ages and that Christmas spirit saves the day in the end. WHITE CHRISTMAS is another favorite that I never miss—because it just wouldn’t be the holidays without Bing Crosby singing White Christmas. Edith Head’s costume design and Bob Fosse’s uncredited choreography are the best—plus I always love a story about sisters. The tear-jerker ending gets me every time. People coming together to honor and celebrate a hero reminds me that there are heroes all around us—especially in these challenging times.

KELLEY
Between the COVID pandemic, the tumultuous political season and the hardships we have all experienced or read about, the kids and I were looking for some inspiration, something that made us feel good, and that gave us hope. We certainly found two documentaries that fit that high mark! The first was the wonderful documentary BECOMING, based on Michelle Obama’s autobiography of the same name. The film follows the admirable Mrs. Obama on her 2019 book tour, giving the audience a very intimate look at her hopes, her journey and her incredible connection to people of all backgrounds. She is not only inspirational and graceful, but also funny and down to earth. So why stop there? We followed it up with THE WAY I SEE IT about the former Chief Official White House Photographer to Reagan and Obama, Pete Souza. The film is extraordinary as it takes you deep into the journey of the Obama presidency with top-secret clearance and total access to the US President. We were moved to tears, more than once,
by Obama’s dignity, grace and respect for the duties of that office. Told through Souza’s incredibly moving lens, we are given the gift of laughter, hope and humanity. A must see! Lastly, I need to throw in an oldie but goodie, LOVE ACTUALLY. Can anyone really every tire of that film which captures everything of this holiday spirit in one film?

We also want to take the time to thank you all for supporting us this summer by attending our “pop up” Berkshire Drive-In. It was wonderful to see many of you in a socially engaged, but physically distanced way, while watching and supporting our independent filmmakers! We are planning a creative and engaging festival for 2021 as well as some winter/spring virtual programs, so look for more details in January! If you are able to, we kindly ask that you think of us when it comes to your year-end giving as any amount helps BIFF survive and thrive!

Wishing you lots of light, good health and good wishes! HAPPY HOLIDAYS EVERYONE!