Invite you to celebrate the 40th Anniversary of

Raiders of the Lost Ark
with a special outdoor screening of the movie
and special guest KAREN ALLEN.

6:00 Cocktails and hor d’oeuvres
7:15 Conversation with KAREN ALLEN
8:00 Outdoor Screening of RAIDERS OF THE LOST ARK

RSVP
Prices:
$125 per person (includes reception and movie)
$20 per person – movie viewing on the lawn
Children under 17 are free on the lawn.

Doors open at 6:30 to set up for lawn seating and picnics.
Bring your own chair or blanket.
Food and drink available for purchase. 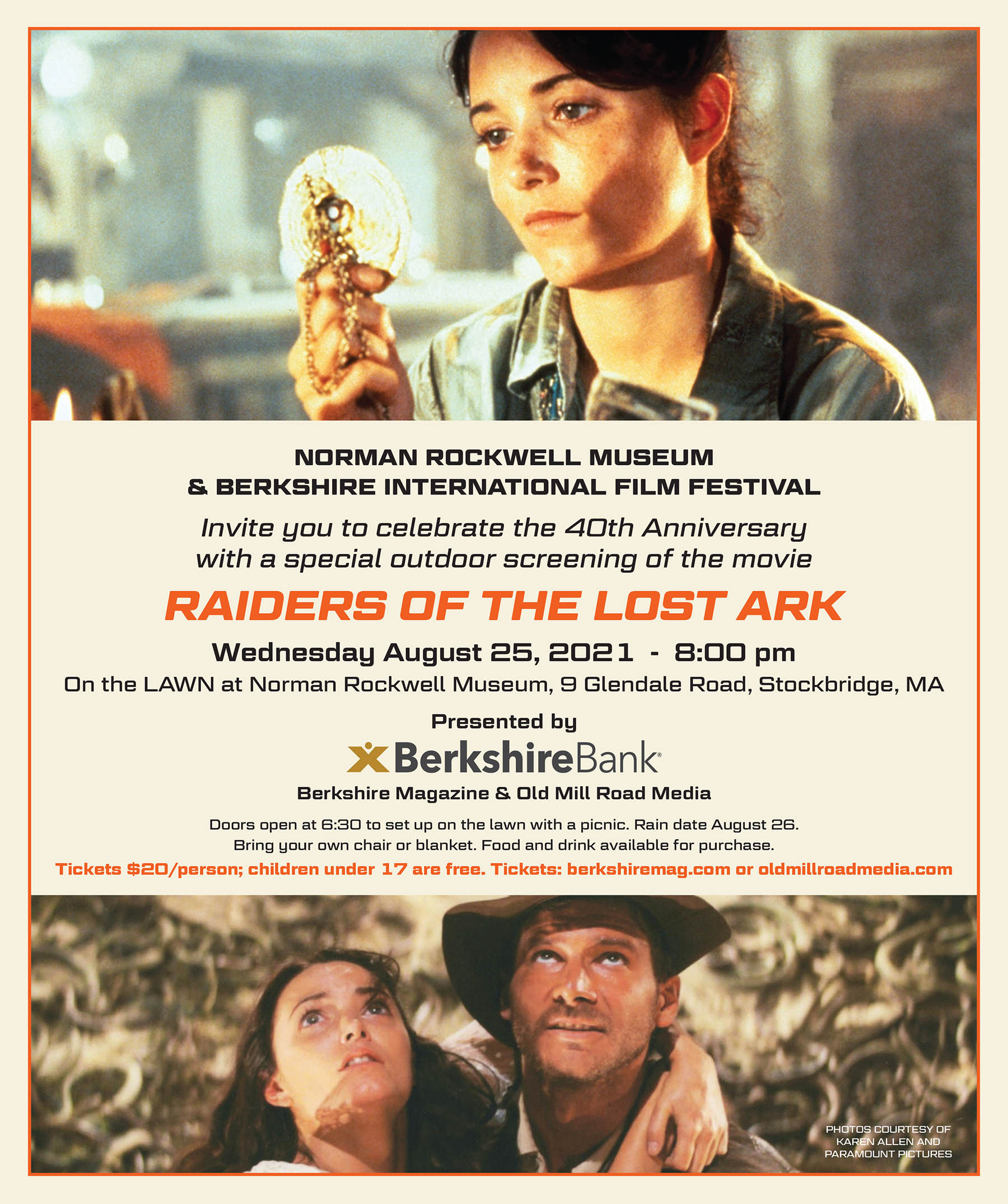 Hate snakes but love Indiana Jones movies? BIFF, the Norman Rockwell Museum, and Old Mill Road Media have got something just for you: A special outdoor screening of classic adventure romp Raiders of the Lost Ark on Wednesday, August 25, 2021.

The film has a number of connections to the Berkshires. Composer John Williams is a regular at Tanglewood, Spielberg and Lucas are big fans of Norman Rockwell, and Karen Allen calls the area home these days. “What better way to raise money for the NRM and BIFF than to host an outdoor screening of this amazing adventure/romance—made by creatives with ties to the Berkshires?!’” said Dr. Joshua Sherman, founder of Old Mill Road Media.

The screening will also be accompanied by a special raffle. The prize? A Steven Spielberg-signed director’s chair.

“We are so excited to partner with BIFF and our sponsors, welcoming all to enjoy the museum’s art-filled campus for a magical film night,” . “It really is a splendid homecoming anniversary for storytellers and dear friends George Lucas and our longtime trustee Steven Spielberg, both of whom were inspired by and are ardent collectors of Norman Rockwell’s art.”

Kelley Vickery, BIFF’s co-founder and artistic director, added: “Those who know the film will get the great pleasure of seeing it again on the big screen, and those who haven’t seen it yet are in for a real treat!”

Sponsored by Berkshire Bank, the screening will start on the lawn of the Rockwell Museum at 8 p.m., but doors will open at 6:30 for those looking to get a picnic supper in beforehand. While you’ll have to bring your own chair or blanket, food and drink (including wine and beer for the 21+ crowd) will be available for purchase at the event. Tickets are $20 per person, with kids 17 and under free. In the event of rain, the screening will take place on August 26 at 8 p.m.