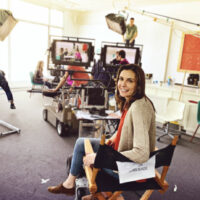 Cynthia Wade is an Oscar-winning documentarian and now fiction filmmaker. She burst onto the scene with her 1998 documentary Grist for the Mill, and has since won over 55 film festival awards for groundbreaking docs like 2008’s Freeheld.

Wade has been a staple of the BIFF scene for years, but for the first time this year, she’s showing a fiction short. Sproutland is inspired by Berkshires health food guru “Sproutman,” and stars his widow Beth Robbins. This is part of a larger pivot towards fiction for the L.A.-based filmmaker.

“Film Set” isn’t exactly a term for a documentary filmmaker, since I embed myself in the homes of my protangonists. The work is incredibly intimate and littered  with ethical landmines. Here are some of my strongest memories of production:

Being pregnant and shooting Shelter Dogs in the mud and snow of Ulster County; knowing the story was explosive, but being unprepared for the boycott that came around that film, because it was largely pro-euthanasia. It was scary AF and also a formidable experience in terms of managing a story that was like a horse that wants to run. I sold the film to HBO and they needed to hire a security detail for me.

Sleeping on the couch of Lieutenant Laurel Hester, who was dying rapidly of lung cancer, and making Freeheld all on my own, and promising I’d take her LGBTQ+ rights story as far as I could, and getting to the Oscars, with her ashes there in a locket, and speaking live to 40 million people about marriage equality.

Other highlights: Living in a remote, unplugged Cambodian village with my crew and sleeping in hammocks. Living on an aircraft carrier and getting caught by the wire. Living on a toxic mud volcano in Indonesia. Backing up to get a wide shot at Tavern on the Green and getting my camera wires entangled in the giant, glittering brooch of a very rich woman (not good).

I made two feature documentaries as a student at Smith College, which launched my path. My first professional film was a personal documentary about my parents divorce called Grist For the Mill, and it aired on Cinemax in 1998.

I’m directing a documentary for NatGeo, and an episode for Apple TV+. Sproutland, my first fiction film (now at BIFF), is an exciting hybrid of directing magical realism. The film was just nominated for “Best Director” in Italy. I’m also co-writing of a feature-length screenplay about the American Shakers with Berkshires scribe Nannina Gilder.