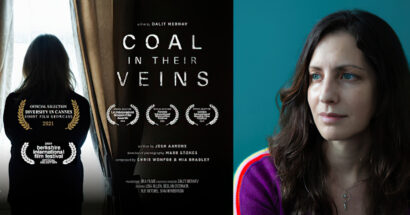 Dalit Merhav had been an editor for 30 years before she decided to step into the role of director. She had edited music videos for UB40, Travis and award-winning music video for Roni Size, ‘Brown Paper Bag’ as well as numerous TV programs and documentaries for BBC, Channel 4, and ITV. After setting up her own successful music production company, Firm Music, she later founded ORA Films, through which she focuses on telling life-changing stories.

Merhav is making waves in the film festival scene with Coal In Their Veins, a film about a tough-loving Yorkshire mother who struggles with the lies, sleepless nights, and endless worry of her son’s heroin addiction. The film, Merhav’s first at BIFF, has won numerous awards and has been screened in Diversity In Cannes, Toronto International women’s film festival and LA Independent Women Film Awards.

I remember walking onto the set of my film Coal In Their Veins and feeling like I’m on a Hollywood movie set. The first shooting day took place at the house of our main character. I originally found a basic Airbnb which was very bare but our fantastic art director put his magic touch on it, adding props and furnishing which made the backdrop come to life, making it feel like a true working-class homely house. It certainly set us up for a great day of shooting and it all ran very smooth.

Coal In Their Veins, which was selected this year for BIFF’s International Shorts category, is the first film I directed. I’ve been an editor for 30 years so moving on to directing has felt natural to me, although I have to admit that I really didn’t know how the film would be received, so I’m really excited that it’s doing so well in the film festival circuit and very honored that it’s been chosen by BIFF.

It’s tricky to narrow it down to one name. I love many directors from the ‘70s and ‘80s, such as Truffaut (The Woman Next Door), Michael Cimino (The Deer Hunter), Wim Wenders (Paris, Texas), Bernardo Bertolucci (Last Tango In Paris), and David Lynch (Blue Velvet). They all portray really well a very deep psychological conflict within their characters which I find very interesting and it’s the type of psychological drama that inspires me to portray in my films. More recently I’ve re-watched Bad Timing by Nicolas Roeg—an uncomfortable film at times, yet very powerful, so I would say he’s my favorite of the moment.

I’m currently working on my next film, a full-length feature. The film is based on my own experience of having cancer at the young age of 22, and focuses on the period after completing chemotherapy. I personally found that coping with the effects of having cancer was just as challenging, if not harder than, the treatment itself, and in hindsight, I believe I experienced a form of PTSD. By making this film I’d like to bring awareness to the need to support people mentally post-cancer so they can regain stability and happiness in their lives moving forward.