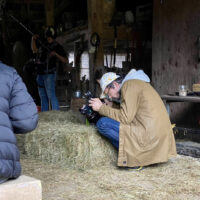 Diego Ongaro is a French filmmaker whose first feature film, Bob and the Trees, premiered at Sundance in 2015. That film put him on the Independent Spirit Awards shortlist for the Someone to Watch Award in 2016. His newest feature, Down With the King, about a rapper who retires to work on a farm, was chosen for the Cannes Film Festival’s ACID program.

“The Berkshire Film Festival is among the best festivals experience in the US,” Ongaro said just after returning from Cannes. “Casual ambiance, friendly and festive, and the crème de la crème films from all over the world among the beautiful Berkshire landscape.” Like the BIFF, Ongaro calls New England his home, just far enough from New York City to “stumble on a black bear” when he takes out the trash.

My first experience on a film set was on my own first short film, Me My Ball And My Bag. It was pretty unorthodox as the film crew consisted of two persons: me operating the camera and my co-director Thomas Pousson booming and recording sound. It was 2005 and we had rented a DV camera for the week end for $300 which basically was the budget of the entire film. We enlisted my family members for actors and shot it over two days. It was a very candid and spontaneous experience. The 7 minute short film made ended up playing in competition at the 2006 Clermont Ferrand Short Film Festival where it won the Canal Plus Prize which consisted of $30,000 directed to make another short film. Not bad for a $300 short.

Three of my favorite filmmakers are Chloé Zhao, Kelly Reichardt and Maren Ade. I love their sensibility and how they craft their stories using unexpected characters, in a very low key way. They do it with so much delicacy yet what they achieve is extremely powerful. Certain Women, the Rider and Toni Erdman are among my favorite films.