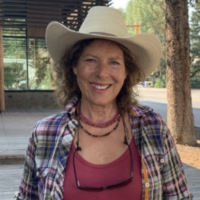 Pamela Tanner Boll is an artist, filmmaker, writer, and activist originally from Parkersburg, West Virginia, and after a stint raising her boys in Winchester, Massachusetts, Boll now calls Boulder her home. She has a strong sense of social justice she brings to all every documentary she works on, whether that’s the Oscar-winning Born into Brothels, which showed Calcutta through the eyes of the children of prostitutes, or A Small Good Thing, which asks us how we can live in a better way. To Which We Belong, her first film at BIFF, highlights farmers and ranchers who are working to improve the health of their land and food with regenerative practices and, in so doing, reverse climate change.

My first film experience was to research and direct Who Does She Think She Is? (2008), a documentary highlighting five women striving to balance their artistic pursuits with raising children. I came to make my first film later in life—I had been an artist, writer, and mother—and I wanted to find out how other women had addressed these issues of taking care of those they loved as well as their own expressive work. My previous film experience had been as a co-executive producer of the Academy Award-winning documentary Born into Brothels (2004), a film about the transformational journey for children of prostitutes in Calcutta.

As mentioned, my directorial debut was Who Does She Think She Is? I spent three years researching the subject of this film before beginning to make it.

I have so many favorites it’s hard to say!  Love Mira Nair (Monsoon Wedding, Mississippi Masala, A Suitable Boy) and Jane Campion from New Zealand (The Piano, Bright Star). I’m also a fan of Steven Spielberg and most films produced by Participant Films.

I’m working on a memoir—essentially telling the story of how a girl from West Virginia and West Texas ended up making documentary films!