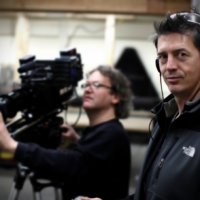 Darby Duffin began his movie career working motion pictures production and development in Los Angeles with producers Barry Bernardi and Cary Brokaw. Prior, he worked at Creative Artists Agency (CAA) and studied method acting at the Playhouse West under Jeff Goldblum. His company, On a Mission Media, produces short films for global brands, feature documentaries, and shoots for media outlets including Bloomberg, CNBC, Hearst, and more.

My first experience on a film set was on Kathryn Bigelow’s sci-fi film Strange Days. I had just moved to Los Angeles and was working as a location coordinator on site at the old Herald Examiner building in downtown L.A. which had been vacant for several years. It was a week of all night shoots and gave me my first inside look at a big budget film set.

The feature documentary, Fish & Men, is my directorial debut. I conceived and developed the story to pitch for a reality TV show looking for the next great documentary. The winning pitch would get $250,000 and a distribution deal by Vince Vaughn’s production company. My pitch made the top 10 out of 5,000. But no deal. So I pitched the idea to my commercial director friend Adam Jones and he jumped on board to co-direct and co-produce the film. Oh, and as it turns out, the $250K wouldn’t have been nearly enough to make this film!

My favorite filmmaker is a three-way tie between Oliver Stone, Martin Scorsese, and Francis Ford Coppola. Each has their own very distinctive cinematic style and approach to visual storytelling. My favorite films from each are JFK, Good Fellas, and Apocalypse Now.

I have a feature narrative that I’m developing with a writer friend and two other feature docs—one in production and one in development.