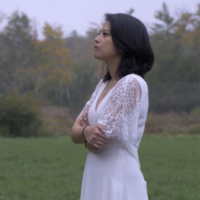 BIFF’s own Jenn Gomez began her screen journey in broadcast television in Norfolk, Virginia as a producer. She relocated to the Berkshires in 2010, calling Pittsfield home and working with the city to alleviate poverty. When she isn’t dreaming up her next project, she serves as the Marketing Manager for Theory Wellness.

Being an amateur filmmaker, my experience on a “real” set has been few and far between, though the small band of filmmakers I normally collaborate with always make our sets feel “real” enough. I have visited Doug Trumbull’s studio before, and it was pretty wild.

I’ve been part of many shoots, from television shows to music videos, but I’d consider Good Conversation to be my writing and directorial debut. It was a concept that I’d had for about 10 years and I’m glad it finally came to fruition.

“Favorite” questions always leave me stumped because it really depends on how I’m feeling. Wong Kar-wai and Hayao Miyazaki are two filmmakers whose works will always leave me amazed and breathless.

I’ve been mulling over a short documentary film about a farmer I just met. Super secret, since I actually haven’t talked to him about it yet…

There might also be a horror project in the works, which is something completely out of my realm (I’m a big wuss when it comes to horror movies) so obviously I’m super excited to do it!